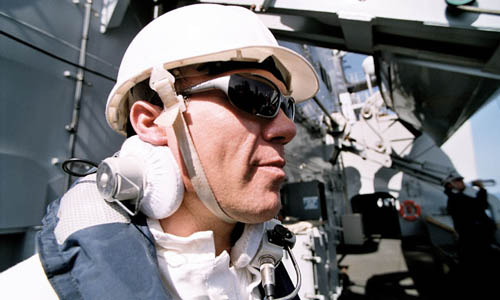 Ark Royal had a Ship’s Company of 650, which rose to over 1200 with embarked aircrew and flag staffs. Such a large organisation required constant administration, which was co-ordinated by the Executive Department.

The Seamanship sub-department, under the supervision of the Bosun and the Chief Bosun's Mate (Buffer), was responsible for all boats operations, refuelling-at-sea arrangements, maritime life-saving equipment and all other aspects of safety at sea.

The bridge height above the waterline on the Ark Royal was 83ft - almost double that of a frigate. This meant that on a clear day we could see almost 15 miles from the bridge.

There were no specific differences between a CVS and frigate or destroyer bridges other than the symbiotic operational relationship with Flyco (a visual control room attached to the port side of the bridge manned by aircrew and used to control the movements of aircraft within the vicinity of the ship).

The Regulating Branch was the Ship’s Constabulary. The Master at Arms and his team were responsible for the maintenance of discipline and the administration of justice. They were originally responsible for recording leave, the associated travel documentation and the handling of mail wherever the ship was in the world. Administration of leave later passed to the Unit Personnel Office and mail became the secondary responsibility of the Band Master.

Ark Royal's physical training staff were on board to advise, support and provide opportunities for physical fitness, sport, recreation and adventurous training to all ranks and rates.

The Chaplaincy Service was provided by a permanent Anglican priest who was the Chaplain of the Ship, and by visiting Roman Catholic and Church of Scotland and Free Churches Chaplains.

The Role of the Chaplain is the same as any priest or minister in civilian life, namely to conduct services and to administer to the pastoral needs of his parishioners such as baptizing, preparing for confirmation and counselling. The Chaplain of the ship was also the friend and advisor of all on board.