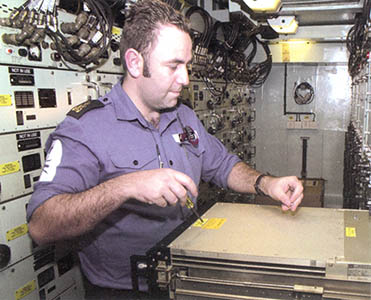 The main equipment contained in 6K Computer Room in 2001 was the Computer Outfit DAK(2) consisting of two Ferranti F2420 24-bit parallel processors used to process and analyse the data provided by the ship's sensors.

Each computer used three types of interface for communication with the system peripherals or peripheral interface equipment.

Ark Royal used a variety of communications platforms such as:

The main mast carried the majority of Ark Royal's communications equipment and surveillance sensors. Also on this mast were a variety of electronic surveillance equipment that could passively detect and discriminate between transmitting targets.

A civilian standard E/F band radar used solely for navigation. It gave enhanced detection of surface contacts, enabling early warning of shipping in any visibility. It was a 'stand alone' piece of equipment fitted immediately forward of the Bridge and provided the Officer of the Watch with a colour picture of all shipping ahead of the ship.

This was Ark Royal's long-range radar. Working in conjunction with the Sea King AEW helicopters it provided early detection of aircraft and missiles at extended ranges.

The system was integrated into the existing Action Data Automation Weapons Systems (ADAWS) and therefore did not include display units. It was synchronised from an external source and used a travelling wave tube to generate a frequency modulated composite pulse to detect both air and surface targets at a range of up to 220 nautical miles.

Provided the ship with medium range detection of air and surface threats, with quality of data sufficient for target indication. It also allowed for the control of Ark Royal's aircraft. It was a three-dimensional naval surveillance and target indication radar that gave:

A hull-mounted medium range active Sonar. Fitted with its own dedicated computer, 2016 used digital techniques to detect and track multiple underwater targets in the active mode and had a passive torpedo warning capability.

The term 'Close-In Weapons' refers to systems that defended Ark Royal from attacking missiles or aircraft.

Ark Royal had three systems onboard and was the only CVS to have Phalanx fitted - the other ships had the Goalkeeper system.

General Purpose Machine Guns (GPMG) could be postioned around the ship.

Ark had an Electronic Conter Measures System designe to protect against radar-guided and infra-red (IR) homing missiles. Three types of round could be deployed:

SeaDart was a medium range missile that could be used against aircraft, missiles and large surface ships. With a range of 40 miles against aircraft it could provide protection for other ships deployed close to Ark Royal.

The SeaDart System used Ark's two 909 Radar to track targets. When the target came inside range the SeaDart controller loaded missiles from the magazine onto the launcher and fired. The missile then homed onto the target and destroyed it.