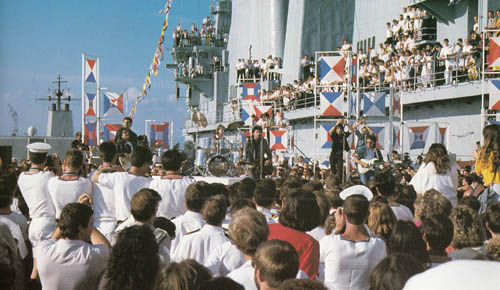 7th April - Day at sea for live broadcast of BBC's Pebble Mill at 1, guest Samantha Fox. Radio 2 presenters including Ken Bruce, Jimmy Young and Gloria Hunniford also broadcast their shows live from the ship off the Isle of Wight.

May - BAMP and Summer Leave.

2nd July - Sail from New York to regroup with escorts.

23rd October - Arrive in Gibraltar to prepare ship for the Rock Show.

30th October - Arrive in Lisbon for informal visit and embarkation of Dutch marines.